American Tribal Style® bellydance (also known as ATS) looks ancient but is actually a young and innovative bellydance style based on an adaption of traditional dance techniques from North Africa, the Middle East, North India and Spain.

The concept of American Tribal Style® bellydance was developed by Carolena Nericcio of FatChanceBellyDance® and combines movement vocabularies and regional costuming to form one cohesive presentation.

There are four major factors that set ATS apart from other dance forms. They are:

1. Group Improvisation
ATS appears to be choreographed but is actually improvisational in nature.  Using a set format of steps, cues and formations, the dancers create a synchronous dance as they go along. This generates a beautiful display of non-verbal communication between each dancer. The dynamic energy can be felt by the audience as the group is creating art right on the spot. No two performances are the same.
American Tribal Style® does feature solos within the group as well as call-and-answer performance with another dancer (duets), or as a whole group. Often there is a chorus which provides a “drone” in the background while the featured pod is the focal point. Both the pod and the chorus are improvised in the moment. Staging for the pod and the chorus is formalized within the ATS® form to maximize dancer visibility on behalf of the audience and likewise maximizing group visibility of the leader.

2. Tribal Posture
This unique posture is regal and proud; displaying a feeling of power, strength and mystery. Both posture and the significant use of arm movements differ greatly from traditional forms of bellydance. 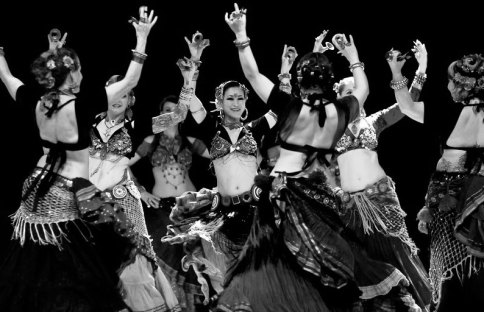 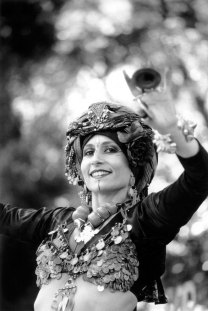 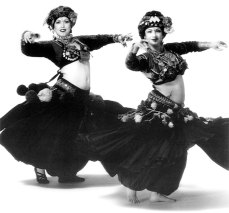 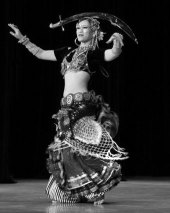 4. Costuming
The costuming is a beautiful folkloric mix and reflects the roots of this dance in that they show the inspiration drawn from many time periods and dance forms. The costume is often embellished with mirrored and embroidered materials and is composed of large tiered skirts, a short choli / top often with a plunging neckline, a visible bra decorated with coins and textiles, hip scarf with yarn tassles or fringe, a heavy layering of jewellery and turbaned head. The turban gives a group an especially unified appearance on stage.
The jewellery commonly originates from Central Asia, from any number of nomadic tribes or empires e.g. Kuchi, Turkoman, Rajasthan and is often large and set with semi-precious stones or glass stones.
Dancers frequently “tattoo” their faces with kohl or kajal. Make-up is usually eye focused with heavy use of kajal. The group also wears a bindi, a forehead decoration traditionally worn in South and Southeast Asia.

For further reading go to fcbd.com/about