Tribal Fusion Belly Dance is a modern form of belly dance which has evolved from American Tribal Style® bellydance, blending elements of ATS® with any other style of dance.

It frequently incorporates elements from Popping, Hip Hop, Breakdance, modern dance, ‘Egyptian’ or ‘Cabaret’ bellydance, as well as from traditional forms such as Flamenco, Kathak, Bhangra, Balinese, and other folkloric dance styles.

The roots of Tribal Fusion lie in American Tribal Style® created in San Francisco by Carolena Nericcio and her dance company FatChanceBellyDance®. One of the founding members of FCBD®, Jill Parker, can be regarded as being the first to create a form of Tribal Fusion. After leaving FCBD®, she formed Ultra Gypsy Dance Theatre in 1996. Under Jill Parker’s direction, UG expanded on the ATS® movement repertoire, using choreographed routines in place of improvised dances, and incorporating elements of Burlesque, Cabaret, and 1920’s dance. 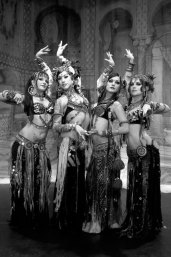 Another early pioneer in Tribal Fusion was Heather Stants, who formed Urban Tribal Dance in San Diego in 1999. Initially, Urban Tribal was heavily influenced by Hip Hop and Street Dance styles, though their current style borrows many elements from Modern Dance. Mardi Love was an early member of UT, who later joined the Indigo and became one of their major choreographic influences.

In 2001 many Tribal Style dancers jumped onto the Tribal Fusion bandwagon and became involved in its early development leading to chaos and confusion surrounding its origins and founders. In the early years of Tribal Fusion the dance form was simply called Urban Tribal Style bellydance.

Tribal Fusion was largely popularized by Rachel Brice and the Indigo (formed in 2003), who became internationally renowned as they toured with the Bellydance Superstars. Heather Stants refers to Rachel as the “adoptive mother” of Tribal Fusion, taking what she and Jill created and nurturing it to maturity.

Rachel Brice describes her dancing as a combination of Suhaila Salimpour technique and FCBD® style, along with a heavy dose of Mardi Love. She also popularized the use of movements similar to “popping,” though she credits Ariellah as the source. Initial members of this group were Rachel Brice, Mardi Love, Michelle Campbell, Sharon Kihara, Shawna Rai, Janice Solimeno and Ariellah Aflalo. Both Rachel and Sharon were members of Ultra Gypsy and credit Jill Parker as a major inspiration. Currently, the Indigo is composed of Rachel Brice, Mardi Love, and Zoe Jakes.

Many tribal fusion dancers use the ATS® “uniform” as a basis for costuming, but usually not all together. Additional elements of the costume are strongly influenced by the nature of the fusion – flamenco fusion dancers will wear flamenco skirts, burlesque fusion dancers will wear feathers etc. Costume are often very elaborate with layer on layer of fabrics, jewellery, fringing, hair ornaments etc. At the other extreme, where the fusion has a strong contemporary influence, the costume is pared down to a sleek minimalist style.

Mardi Love pioneered many of the most popular elements in Tribal Fusion costuming. Despite being part of the more minimalist Urban Tribal, she helped sculpt the intricate, vibrant, and complicated costumes worn by The Indigo. She is credited with being the first one to make contemporary cowrie falls, using colorful, hand dyed yarn to braid cowrie shells together. She also created one of the most popular belt styles by using two pieces of an Indian (frequently Kuchi or Banjara) belt bases as the front and back, adding four beaded medallions (one to each end of the belt bases), and adding colourful yarn fringe.

Pants are now worn by almost every Tribal Fusion bellydancer. They are often characterized by their large flare that is split up to the knee along the outside seam, and finished with a lettuce edging. Basic pants come in many colours of cotton lycra with a mini skirt, sash, or fringe attached at the waist. Pants can also be made from a variety of mesh, slinky, or velvet fabrics.