The Tribal Bellydance movement began in the San Francisco bay area in 1967, founded by Jamila Salimpour. The general category Tribal Style is accredited to Jamila Salimpour who fostered a fusion of costumes and folkloric dance styles and began teaching what she knew and performing all over California and the West Coast.

Utilizing traditional folkloric dance elements and costumes inspired by traditional and ethnographic traditions, she presented on stage through Bal Anat a colorful dance company which included musicians, singers and dancers to create a “souk” or almost circus feel. Taking what she herself had learned from native dancers from Morocco, Algeria, Turkey, Egypt, Syria and Lebanon who were dancing in the United States, she began to catalogue “bellydance movement” and began creating a basic repertoire terminology which is still the basis for Tribal Fusion and American Tribal Style® repertoire. 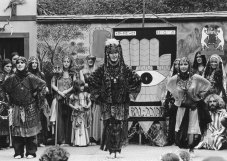 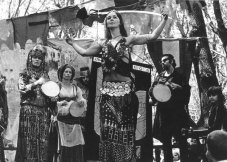 Jamila Salimpour taught Masha Archer, a feminist and visionary who sought to remove the sexist stigma that had been attached to bellydance since the colonialist era of the mid 19th century. Masha Archer taught Carolena Nericcio who would later go on to become the innovator behind American Tribal Style® bellydance. Carolena Nericcio went on to teach ATS® to Jill Parker who in turn taught Frederique Johnston, Beth Masse, and Mishell Burt. In 2000, Frederique Johnston, Beth Masse, and Mishell Burt began formally creating the dance form that would one day be known as Tribal Fusion in the San Francisco Bay area after breaking away from the ATS® group, Ultra Gypsy, directed by Jill Parker.

To distinguish the form from ATS® Romani introduced world music, electronica and Classical music to Tribal Style movements. This changed the shape and pace of Tribal Bellydance. Popping and Locking was introduced as it fit naturally with the new electronica beats. Romani also introduced a more toned down costuming aesthetic from its ATS® parent form. Where ATS® dancers were known for wearing turbans, choli tops, full skirts, pantaloons and tassels the emerging Tribal Fusion form dropped the turbans in lieu of a smooth head scarf, dropped the full skirts and tassels in favor of simple pantaloons. Tribal Fusion was introduced to fellow bellydancers at the first Tribal Fest in Sebastopol, California in 2001 though it had been performed in the Bay Area by Romani since 2000.

Stephanie Barto, a student of Nerriccio, brought ATS® to the Midwest with a group called Read My Hips, founded in Chicago with Heather Stants. During the early development of Tribal Fusion, Heather Stants also worked to introduce new elements to Tribal Style bellydance, including a minimalist aesthetic, underground electronica music and elements of modern dance. In 1999, she formed Urban Tribal Dance in San Diego, largely influenced by Hip Hop and Street Dance styles. In contrast to many other Tribal Fusion performers, Urban Tribal was known for their minimalist costuming more traditional to modern dance than to Tribal Style.

So Tribal Style today represents everything from folkloric inspired dances to a fusion of ancient dance techniques from North India, the Middle East and Africa. As a general category, Tribal Style covers many flavors of American bellydance both the folkloric inspired and fusion and cross over styles which explore Modern, Jazz, Dance Theatre, and Hip Hop with bellydance, as well as fusion with traditional classical ethnic dance forms like Bhangra, Bharata Natyam, Flamenco and even Polynesian and West African Dance.

These are a group of dancers with tribal style belly dance traits composing choreography on the spot (i.e., improvising) through previously arranged cued moves. Can have solos, but generally supported in a group environment.